← The Art of Self-Leadership: Key factor for business success Boost your Meeting ROI with these ten strategies → 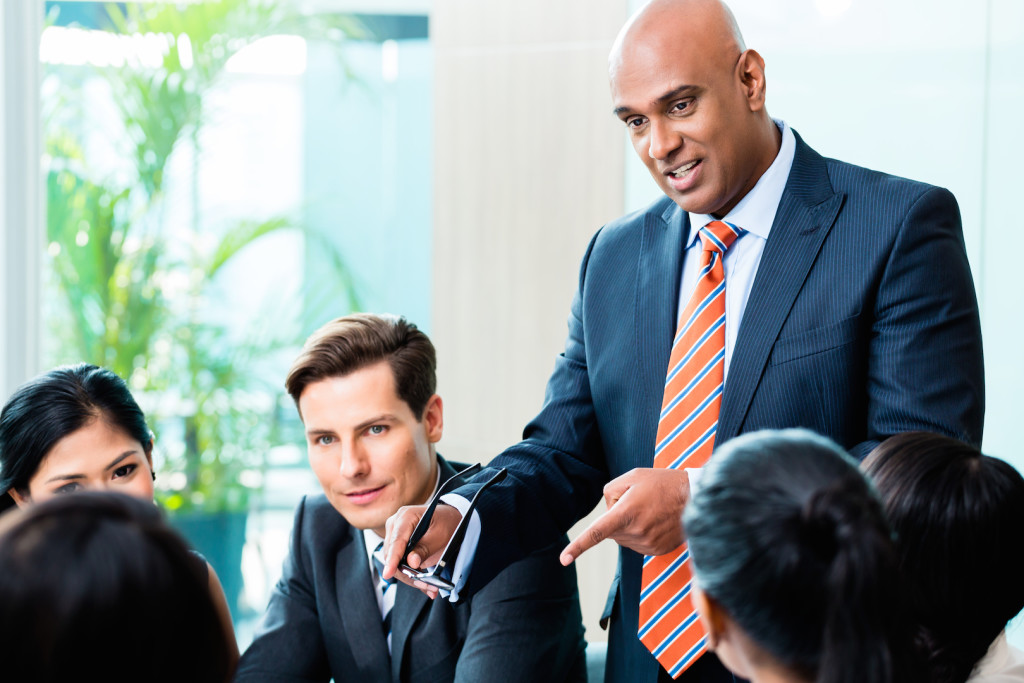 Do you recognise this scenario: You are listening to somebody and you understand everything immediately and you are totally convinced. You might have come across what I would call a “King style” communicator. At other times, you are listening to a manager and what he or she says sounds like a string of never ending banalities? Then you might have experienced a stereotypical “Babbler”.

In my view, it is at times worthwhile to look at the language patterns behind the way individuals communicate, as these can drive comprehensibility and impact. When I do advanced analysis of board presentations and senior leadership communication, I also look at the following two dimensions:

If we draw a 2 × 2 matrix based on these two dimensions, four typical styles of leadership communication can be identified: the “Philosopher style”, the “Babbler style”, the “Sesame Street style” and the “King style”. 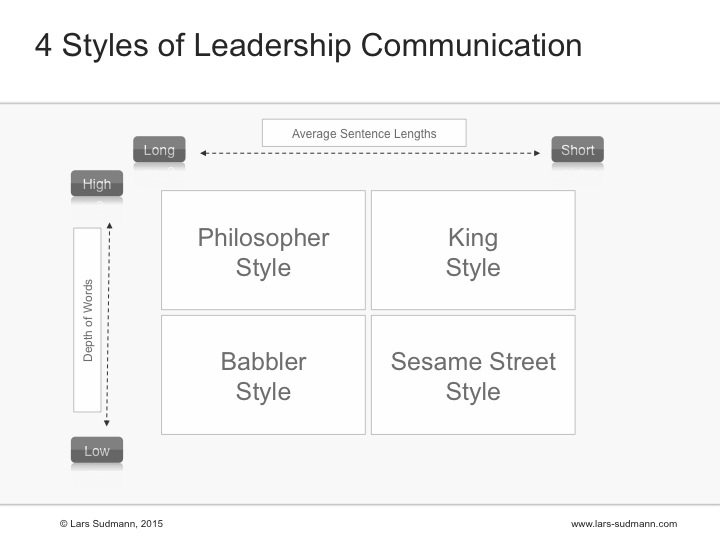 The University of Hohenheim in Germany has studied presentations of CEOs of the DAX30 (the top German stock listed companies) in terms of clarity of the spoken language. They found, for example, a sentence delivered by former Siemens CEO Peter Löscher. Google translates the sentence roughly into the following (German original at the bottom of the post):

“And it’s not just the place where our own urban planners and technical experts are working on infrastructure solutions for tomorrow, but it is also a platform for exchanges between our experts and municipal decision makers in the cities and it therefore serves to facilitate contacts, solution identification and future business development.”

With 46 words in a sentence also in the German original it is certainly an extreme example. However, hardly any other DAX CEO speaking at Annual General Meetings was a shining example of clarity and comprehensibility. The presentations were often riddled with heavy structures, technical terms, and nesting.

Although the philosopher style is often correct in linguistic terms, the problem is that during a spoken presentation these long, complex sentences are not very convincing and can fail to connect with audiences. People often simply cannot follow such a long sentence and switch off.

This is also the case for the already above-mentioned “Babbler” person. This type also uses very long sentences, but without the depth and complexity of the words. Very often, the blocks are composed of endless strings of simple words connecteced by “… and …” “… so …” and “… and …”. Comprehension and impact also suffer here as it’s very difficult to put the right emphasis. Obviously also not the best approach.

The big leap in communication impact comes from watching one’s sentence length during any spoken communication. Leaders can learn here from radio moderators. It is recommended that radio presenters and news broadcasters use +/- 9-13 words per sentence. This ensures maximum comprehension.

If the words per sentence are far above, the chance is high that your listeners cannot follow your thinking: something that should be avoided in every leadership communication. Right of that magic line we find two acceptable patterns in our model: The “Sesame Street style” and the “King style.”

One of the CEOs for which I used to work stated that all presentations that are to be delivered to the board of directors must pass the so-called “Sesame Street Check”: Can the presentation be understood by a Sesame Street audience?

And this was not meant as an affront in respect to the intellectual capacity of the board members. Quite the contrary: it was a check that pushed all presenters to be crystal-clear in every sentence. Short statements such as “We recommend to build the plant in town X.” honor the brief time that board members have and often achieve exactly the effect you want to have.

To be clear, speaking on business topics in this “Sesame Street style” needs a lot of preparation. It is easy to communicate in a long-winded fashion. As Blaise Pascal said: “I have made this longer than usual because I have not had time to make it shorter.“

I have named this style after Martin Luther King, Jr. He was a prime example of this type of language and his speeches moved millions. Here, the sentences are easy to comprehend but the words are deep and meaningful. This can often result in beautiful and powerful language.

One example for this is Public Speaking 2004 World Champion of Public Speaker Randy Harvey. During his World Champion speech he marveled the audience with deep, beautiful words. For instance, at one instance he could have said: “I was surrounded by dogs.” This would have been already fine and easy to understand. But instead he said: “I was surrounded by a pack of hunting hounds.” More colour, more depths, but in a short sentence. This is the power of the “King style”.

For impact, speak in short sentences.

For your leadership communication it is therefore important that you use your focus on clear sentences with less than 9-13 words. Whether you prefer the “Sesame Street style” or the “King style” is ultimately a matter of personal choice and long-term dedication to improving one’s language. Both can lead to success and impact.

Lars Sudmann is an expert on high-performance leadership in global corporations. He works with multinational organizations as well as leading universities as change consultant, keynote speaker as well as workshop facilitator. This article also appeared on his blog: www.lars-sudmann.com, where you can also watch his TEDx talks. You can also follow Lars here and on Twitter.

Do you want to read further on this topic? Here is a link to my top 10 book recommendations on interpersonal communication.

*and here the sentence in German:

The Need for Proactive Leadership

@Top Articles, Leadership & Management, Organization, Culture & Change
It is always easy to write about leadership, and always difficult to do ...
Read More