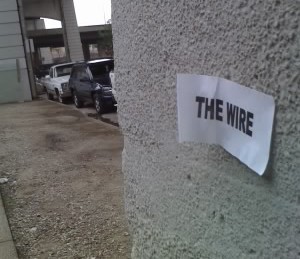 Do you know the TV series “The Wire”?

Here’s the play: a police series in Baltimore trying to crack down on the drug war. This goes on over 5 seasons, displaying various institutions in Baltimore.

Some of you might be thinking now: Police series? Baltimore? How boring should that be?

However, it has an IMDB database rating of 9.4 out of 10.0 and Entertainment Weekly called it the greatest TV show ever.

It was also probably one of the best things I have ever watched. It is actually more of a treatise about institutions and individuals than a normal cop show.

While I was watching this series I couldn’t help asking myself:

This is really great, but why did they let this play in, ehm, Baltimore? (sorry, Baltimore people)

Then I found the answer in the interview section of the DVD of the last season, where the creators and directors talk about the success of the series.

And there I learned the reason, and probably also about a key ingredient for the success of all of us:

Co-creator David Simon was a journalist for 12 years – at the Baltimore Sun. Producer and screenwriter Ed Burns was a homocide detective with the Baltimore police.

When being interviewed, they mentioned that they will only write about things they knew and experienced themselves. Things they knew from the inside-out.

Not something artificial, not something that might be a great idea. No, rather pure and genuine thinking. And this has created probably one of the best and most authentic TV series in a decade.

Comedian Ricky Gervais gives a similar overview when he talks in his usual style about his creative writing process in this interview:

What was the great thing for him, the best advice he ever got?

Write about what you know!

Don’t come up with grand, theoretical ideas, but stick to what you know, and then talk about that.

So what can you learn from this for your success? Besides writing and film-making, this is also valid for:

Want to get updates from Lars Sudmann?

Subscribe to the blog on this page to get immediate updates.

Subscribe to the newsletter on this page to get a monthly digest.